Percent of Americans With College Degrees 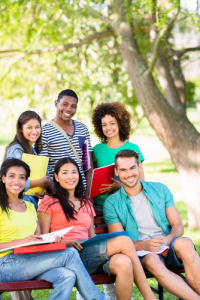 As time progresses, college degrees are becoming more and more popular in America. The bachelors degree is slowly becoming as common as the high school diploma, which is decreasing the probability of undergraduates getting jobs in their field right after graduation. Why? Because companies tend to look for candidates with outstanding qualities, and people with masters degrees are more likely to stand out to employers.

If you don’t plan to attend graduate school, then consider getting involved in clubs and organizations relevant to the industry in which you plan to enter upon graduating. The more dedicated and involved you are with activities and academics, the shinier your resume will be. It will be so shiny that it’s much more likely to catch an employer’s eye as opposed to someone who sticks purely to academics while enrolled in a bachelors degree program.

America and the College Degree

More and more Americans are enrolling to earn college degrees almost daily. In 2011, it was estimated that 38.7 percent of American adults held at least two-year degrees. A year later, the percentage jumped to approximately 39.4 percent of Americans aged 25 to 64 fell into the same category.

According to NPR, as of 2014, the United States sits at number 13 on the list of the most educated nations across the globe, when we were once number one back in the late 1800s. In addition, around 22 percent of adults possess some post-secondary education but do not hold degrees.

Percent of Asians with College Degrees

Research shows that 59.4 percent of Asians in America have at least a degree earned after two years of post-secondary education as of 2012. This is the highest percentage of a race within America to possess a degree or certification.

Percent of Caucasians with College Degrees

In 2012, 49.3 percent of the Caucasian race had a two-year degree or certification at the least for adults from 25 to 64 years of age, nearly ten percent less than Asian Americans.

The percentage of Native Americans who had earned two-year degrees or higher in 2012 was at 23.4 percent.

Percent of Latinos with College Degrees

With the steady rise in gender and racial equality, these statistics can only be expected to improve throughout the course of years to come.