What Can You Do With An Astronomy Degree?

Home » Degrees » What Can You Do With An Astronomy Degree? 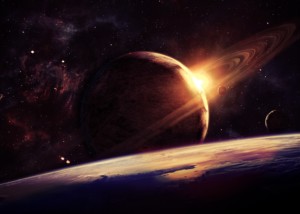 Astronomy is the study of everything from meteors and stars to planets and galaxies. People who study astronomy may study specific masses, such as the moon or sun, or various aspects of the universe as a whole. What specific things can you do with an astronomy degree? This article answers that question and more by providing examples of a few higher education facilities with noteworthy astronomy programs and career paths you can take once you earn a degree in astronomy.

Throughout history, the world has produced some very well-known astronomers who have given us insight into the endless abyss of space. Just a few examples of notable astronomers across the ages are listed here in this section.

Eratosthenes (276 BCE-195 BCE) discovered that the planet Earth is round, not flat, contrary to popular belief at the time.

Claudius Ptolemy (AD 90- 168) created the geocentric model of space, implying that all masses revolve around Earth, which has since been disproved. We now use the heliocentric model, created by Nicolaus Copernicus (1473-1543), noting that the planets of our solar system revolve around the sun.

Tycho Brahe (1546-1601) studied the planets and stars, studying both a supernova and a comet as closely as possible at the time, keeping track of their measurements and what travel [if any] each did, which led to the disproving of the common belief that outer space never changes.

Galileo Galilei (1564-1642) is best known for his work on drastically improving the invention of the telescope and charting stars and planets.

Sir Isaac Newton (1643-1727) developed the three main laws of physics, or forces applied to objects, by studying the concept of gravity.

Albert Einstein (1879-1955) is known for his eye-opening concepts of space and time, how the laws of physics may be the same throughout the entire universe, and how gravity distorts space-time, making it unlike the speed of time on Earth.

If astronomy seems to be a particularly appealing subject to you, consult with your high school guidance counselor to find ways you can prepare to study astronomy before graduating from high school. Your school may offer a few courses that just might advance your knowledge of astronomy enough that you will be able to better grasp some newer concepts taught in universities and colleges around the world.

Amherst College, a private liberal arts school in Amherst, Massachusetts, offers undergraduate students the opportunity to major in astronomy. The astronomy program is designed to educate students in the fields of computer science, physics, and statistics and other types of mathematics in order to help improve their analytical and problem solving skills in reference to studying outer space. Amherst offers various astrophysics courses, as well, to advance students’ knowledge in the combination of astronomy and physics and how the two subjects can be used together to understand the various expected and unexpected changes in the universe and lead to new and revolutionary discoveries in the world of space systems.

Outside of Philadelphia in Haverford, Pennsylvania, Haverford College provides students with the chance to earn either a Bachelor of Arts in Astronomy or a Bachelor of Science in Astronomy through the school’s Departments of Physics and Astronomy. These programs focus on understanding the various characteristics and occurrences within the universe through the use of physics and other scientific methods. Students learn how to expand their quantitative reasoning and independent thinking skills in order to improve their ability to study the universe and its many differing qualities. The school also encourages astronomy majors to double-major, or earn a second major, as well.

Located in College Park, Maryland, the University of Maryland has a program in which students can earn a Bachelor of Science in Astronomy as well as the chance to earn a graduate degree in astronomy. The astronomy degree program for undergraduate students offers various research opportunities to expand students’ experience levels in addition to their knowledge within the field of astronomy, which is particularly beneficial for creating impressive resumes to present to potential employers. The school also has an extragalactic astronomy group, a planetary astronomy group, a space and plasma physics group, and more that allow students to get involved and get experience in a more specific field they may choose to pursue.

While earning a degree in astronomy, you should be thinking about the types of careers you may be able to land after graduating from college with your degree. If you are able to pinpoint a specific type of career that most interests you before leaving school, you may have the ability to form your studies around that particular career to help you become more successful in your career field immediately after graduating.

Some students may find it helpful to partake in a dual degree program in which they are able to earn two degrees within a shorter time frame at a college or university. Some combinations of subjects that may be particularly helpful if you are interested in pursuing a career in astronomy include physics and astronomy, astrophysics and computer science, and mathematics and astronomy among others. For more information on dual degree programs, click here.

Upon earning a masters degree in astronomy or related subject and gaining experience through a work program or internship, you just may qualify for one of the positions elaborated on in this section. Many careers in astronomy also require a doctoral degree.

Astronomy professors may earn an annual salary of over $87,000, based on education and experience levels.

Theoretical astrophysicists may earn around $86,000 annually, based on education and experience levels.

Once you have completed your college career, you will need to jump into the workforce. The job market is not exactly booming for budding astronomers, so it is important that you build a particularly shiny resume in order to impress potential employers. Some examples of places that hire people with astronomy degrees are listed here.

Astronomy is not an easy field to get into. If you are interested in pursuing a career in astronomy, you should seriously consider the time, money, and dedication you will put into your education in order to outshine others in the field. If you possess excellent time management and analytical skills, you may have an advantage over others looking for jobs in the field of astronomy. Dual degree programs may be particularly helpful in reducing the time it may take you to earn your desired degrees.