What Can You Do With A Film Studies Degree?

Home » Degrees » What Can You Do With A Film Studies Degree?

Consult your high school guidance counselor if you’re considering a career in film. He or she may be able to assist you in choosing courses while you’re still in high school that will help prepare you for a future education in film studies. Skills that will help you and most likely be further developed as you continue your education include but are not limited to critical thinking, analytical, and both oral and written communication.

Founded in 1965, the University of Warwick is now located in both Coventry and London, England. The school’s Film and Television Department is ranked number two in the United Kingdom for the quality educational experience it offers students. Students studying film at the University of Warwick receive knowledge on film culture and history and learn how to analyze films in order to help create top quality pieces that captivate audiences across all genres. Educators are dedicated to providing their students with the knowledge and assistance they need to tackle the task of putting together a dissertation during their third year, as well. Research projects and study abroad opportunities are heavily valued at Warwick and, in turn, help students land jobs doing what interests them after graduating from the film studies degree program. The school also offers a degree in film and literature.

In Middletown, Connecticut, Wesleyan University offers an excellent bachelors degree program for those interested in pursuing film studies. At Wesleyan, students learn about the making of digital, virtual, and 16mm film formats. Undergraduate students also receive instruction on the history and theory behind film. It may be a popular subject, but is a bit of a challenge to enter the film studies degree program at Wesleyan. Students interested in enrolling in the film studies degree program must first meet with the chair of the film department to present their argument for why they should be accepted into the program. In their final year in the program, students are required to compile a thesis, create a screenplay, or direct a film or other virtual project.

Chapman University provides a variety of different bachelors degree programs related to film–Film Studies, Film Production, Digital Art, News and Documentary, Television Writing and Production, and more. Students earning a Bachelor of Arts in Film Studies concentrate their studies not only on the history, theory, and criticism of film but on gaining knowledge through hands-on experience in sound design, lighting, editing, and cinematography. The film studies degree program at Chapman is excellent preparation for students set on entering film production. The program is designed to also educate students on film concepts used around the world; the many ways in which film portrays society based on elements such as age, gender, and race; noteworthy filmmakers; and more so students are able to visualize and understand how to succeed in the world of film.

A film studies degree may help you get a job working with others in the film industry, focusing on documentaries or movies of other genres. In order to ensure you receive an education best suited for your career goals in the filming industry, it is important to first recognize those goals. Having a general idea of what career path you plan to travel post-graduation will help you form your educational experience with specific courses that will best prepare you for that particular path while you’re still enrolled in a film studies degree program.

Regarding film studies major jobs, a film critic spends his or her days critiquing newly released movies. Some film critics also get to interview actors, producers, directors, and other people who are involved in the film-making process. Film critics possess outstanding written and oral communication skills and excellent analytical skills in order to best present good-quality content to readers and viewers interested in film. Although higher education isn’t always necessary to fill a position as a film critic, a bachelors degree in film studies, media studies, or communications can be particularly helpful in helping a film critic develop well-informed critiques and boosting his or her credibility.

Film critics may earn more than $35,000 annually, based on education and experience levels and whether they are freelance or employed by an entertainment company.

An assistant director may have many responsibilities on a film set, including but not limited to keeping track of props necessary to carry out each scene as well as special effects and managing the filming schedule. An assistant director also often holds the list of filming locations and their alternate names according to the script of each film. An assistant director is highly organized with excellent time management skills and may have a bachelors degree in film studies or media studies. He or she is also very astute when it comes to script and set details. It is also not uncommon for assistant directors to later progress their careers as directors or producers.

Assistant directors may earn over $39,000 annually, based on education and experience levels.

With a bachelors degree and a few years of experience or once you’ve earned a masters degree in film studies or another related subject, you may find that you qualify for one or more of the positions described in this section. 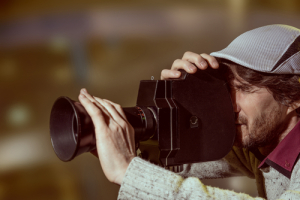 A cinematographer works with the cameras, using his or her particularly creative eye to focus on everything from light and mic placement to choosing various camera angles in order to create the most unique and intriguing way to capture the various scenes of a film. Cinematographers may also oversee crews of cameramen and, therefore, possess leadership qualities and high communication skills. They do not always possess college degrees. Degrees in media studies and film studies can help cinematographers understand the angles film critics take when analyzing and rating films, and knowing those specifics assists cinematographers in understanding how to captivate audiences.

Cinematographers may earn over $60,000 annually, based on education and experience levels in addition to the level of recognition their films receive.

A film editor reviews footage and determines what to remove in order to best portray the message that the director aims to convey through the film. In turn, the film editor often collaborates with sound technicians and cinematographers to finalize the project. Film editors possess outstanding time management and communication skills and have extensive knowledge in the art of film-making. They often start out as interns or assistant editors in the film industry in order to gain sufficient experience necessary for progressing up the career ladder. A masters degree in film studies is also highly beneficial.

Film editors may earn over $65,000 annually, based on education and experience levels.

The filming industry is a rather competitive place. Make sure you can WOW employers with an impressive resume sprinkled with an internship or two, experience gained through volunteering on film-related projects, positions held in school clubs or organizations, and/or other useful examples of how you’ve gained relevant experience. A few examples of places that hire people with film studies degrees are listed here.

So if you’re interested in making your dream of being a well-loved filmmaker a reality, then you should certainly consider earning a degree in film studies. You may just become the next Steven Spielberg!