Welcome to the Real World

You’ve probably heard this one before: college student graduates, has valuable degree, cannot find a job, and moves back home. Sadly, this is a new reality that college students have been facing for the past few years. It continues to be the reality for the new college graduate.

Whether you’re still in college or you’re in the middle of your job hunt, taking the time to see which companies are hiring from the graduating classes of which top colleges can be valuable knowledge. Using LinkedIn, we took a look at the hiring trends for alumni from top colleges to learn more. Read on to find out if a high-profile company just might want to hire you. 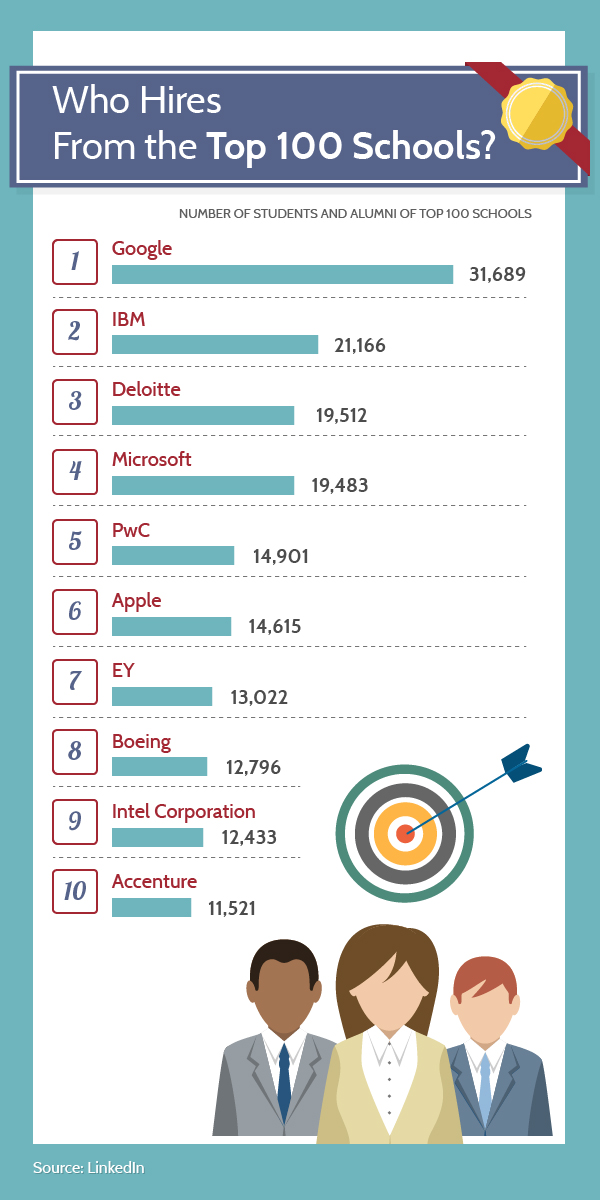 The chart above shows the companies that are leading the pack in plucking new graduates from the top-tier schools. An immediately noticeable trend is the dominance of contracting firms such as Deloitte, PricewaterhouseCoopers (PWC), and Accenture. While the work of these companies differs, their targets seem to be college graduates from the same top schools. Companies with big names like PWC and Deloitte offer an enticing promise to the driven, young employees: With good work ethic and enough determination, they can find themselves in a very successful career with a high-paying salary.

On the other side of this deal, the companies benefit from having young, smart, energetic minds who have a thirst to prove themselves and the determination to succeed. Companies like Deloitte – where the success of someone’s career is directly related to the number of projects and clients they build – benefit from a mind they can mold and train to company policy. They also benefit from young employees who are focused and determined to bring in money and garner management’s attention.

Looking back at the table, you can see other technology-driven companies such as Google and Apple benefitting from the top-tier graduate pool. The process of recruitment in Silicon Valley is slightly different; offers are generally made to the highest performing members of programming and application design graduating classes. This is a boon to both the company and the new hire: The employee has a platform to capitalize on new ideas or technological development, and the company remains fresh and at the head of the curve with young talent. 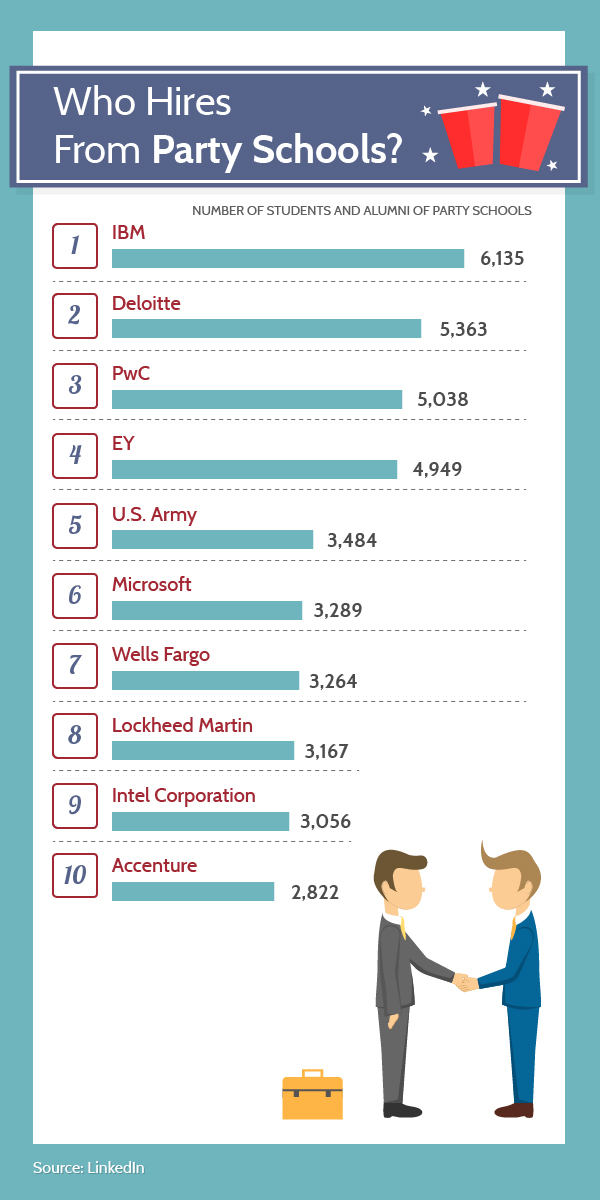 Party schools refer to colleges that are home to the highest percentage of students who say drugs and alcohol are common, fraternities and sororities are active, and studying time is minimal. Of all the statistics one hears about party schools, the companies that hire their graduates are not usually among them. However, as the graphic reveals, several well-known consulting firms, tech companies, and financial firms dominate the list of top hiring companies.

Why? While it’s not possible to draw a direct correlation about why students from party schools are chosen, one theory is that students who do graduate from a party school have honed the ability to practice self-restraint – not to mention gained a network of friends and some impressive social skills to aid in finding work. Another factor: Despite their reputations, many of these “party schools” are top-notch educational institutes in their own right. For instance, top party school University of Illinois at Urbana-Champaign also ranks among the Best Midwestern Colleges and the Best 380 Colleges. 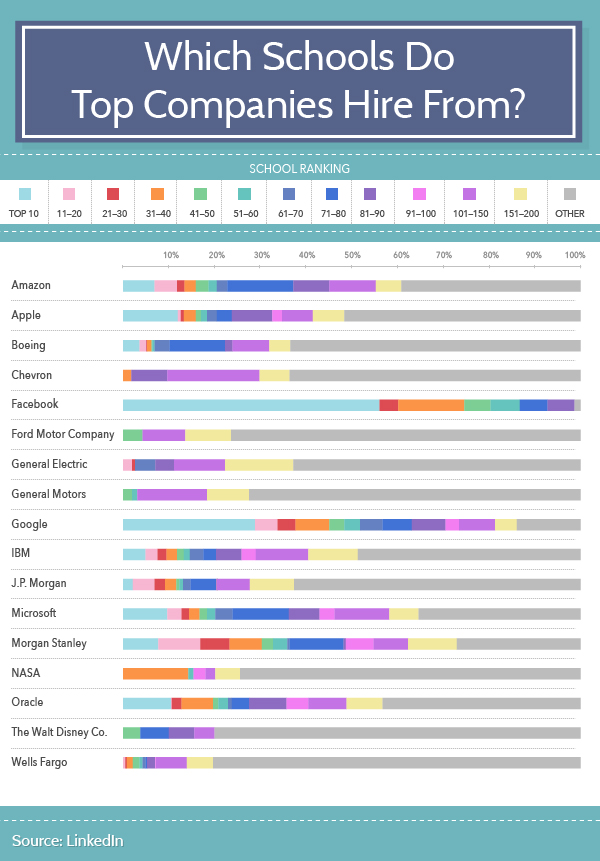 Everyone is familiar with the notion that you can only hope for the best jobs if you graduate from the best schools. And in some instances, this may be true. Certain companies – including Facebook and Google – still have a high percentage of hires from top 10 schools. In fact, over half of Facebook employees we looked at on LinkedIn graduated from schools in that bracket.

However, the tides are changing. The data are starting to show that the school you graduate from does not necessarily dictate the companies that will consider you. Many of today’s top
companies are hiring grads from all types of institutions. And rather than vetting candidates based on college degrees, many are hiring employees for specific skill sets – among the most coveted are leadership, the ability to work with a team, and strong communications skills.

It’s important to note that this is not a complete breakdown of the employment of each company, but rather a breakdown of the schools from which these companies hire the most often. The LinkedIn data we looked at did not list every employer of alumni – just the top employers from each institution.

The Top Schools That Matter to Specific Sectors

To get into the career of your dreams, you have many options to lead you there. For example, as the table shows, if you are hoping to break into the Banking/Finance field, you may want to look at certain universities. The online, for-profit school University of Phoenix, Arizona State University, and the University of South Florida all had a strong presence in this field when looked at LinkedIn.

However, another very important factor for entering your field of interest is the location of your school. For academic studies such as film and television, New York and California boast local opportunities for students to break into the industry, as demonstrated by the above table.

The notion that going to an Ivy League school is the only way to get into the best companies is now ready to be retired. The workforce is shifting, and companies are looking for the best quality employees who will thrive in their company. Of course, there will always be advantages to getting the attention needed in specialized industries by going to the right schools. The focus now more than ever is to make yourself stand apart from the crowd of other graduates. Enter college with a game plan, know the types of employers you want to get the attention of, and make sure you’re at a school where they’ll be watching.

We pulled the data readily available on the LinkedIn pages of colleges and universities – namely the top employers of alumni from these schools. We looked at the top places of work for alumni from the Forbes’ list of top 100 schools in the U.S. and the Princeton Review’s top party schools to establish the top hirers of alumni from these universities. To establish where among the rankings companies are hiring, we again compared the Forbes list to the list of schools on LinkedIn and combined schools of similar rank to simplify the visualization of the data.