What comes to mind when you think about the rap and hip hop genres of music? Catchy beats, loud music, puffy coats, “bling.” How about education? Probably not. But you may be surprised to find that some notable rappers have graduated with college degrees in all sorts of subjects.

Take your music education to the next level: check out these eight familiar rappers who you probably didn’t know have college degrees.

Flava Flav (less commonly known as William Jonathan Drayton, Jr.) of the group Public Enemy attended Adelphi University in the 1980s is one of the rappers with degrees on our list. While at Adelphi University in Garden City, New York, Drayton chose to complete a bachelors degree program in business and radio communications before taking on his graffiti tag as his stage name.

Another member of Public Enemy, Chuck D. (Carlton Douglas Ridenhour) also attended Adelphi University in the ’80s. Chuck D earned a bachelors degree in graphic design. Three decades later, in 2013, Chuck D received an honorary doctorate degree from his alma mater at which he was the speaker at Adelphi’s 117 Commencement.

As a rapper, record producer, actor, and more, Ice Cube (O’Shea Jackson) is a regular rapping renaissance man. He earned his associate degree in architecture, specializing in drafting, from the Phoenix Institute of Technology in 1988. Since then, he has gone so far as licensing his own clothing line, collaborating in music with big names like Tupac and David Bowie, and assisting in the production of 23 films including Barbershop 2: Back in Business and Lottery Ticket and the television series Are We There Yet? among other accomplishments.

Born Paul William Francis, Sage Francis attended the Dean College in Massachusetts where he earned an associate degree in communications. He then went on to further his education, getting a bachelors degree in journalism from the University of Rhode Island in 1999. In addition to being a hip hop artist, Francis is also a spoken word poet.

David Banner, less commonly known as Lavell William Crump, attended Southern University in Baton Rouge, Louisiana. Banner accepted position as president of the student government association while earning a bachelors degree in business. He also partnered with Kamikaze, forming the rap duo Crooked Lettaz. After graduating from Southern University, Banner enrolled in a masters of education degree program at the University of Maryland Eastern Shore but left without completing the program in order to pursue a career in music.

This British rapper particularly artsy. Born Mathangi Arulpragasam, M.I.A. attended London’s Central Saint Martins College of Art and Design from which she earned a degree in fine art, video, and film. She started out as a designer, visual artist, and filmmaker, and boy has she come a long way! From singles “Boyz” and “Paper Planes” that have flown high up Billboard lists to joining various global headlining tours, M.I.A. is a lady on a mission. She has even founded N.E.E.T., her own multimedia label.

Born Donald McKinley Glover on the Edwards Air Force Base in California, the man more commonly known as Childish Gambino graduated from New York University in 2006 with a bachelors degree in dramatic writing. Since then, he went on to write for 30 Rock, an NBC television show, for three years and receive the Writers Guild of America Award in 2009. He has also produced and appeared in various films and television shows in addition to releasing albums like Sick Boi and singles, many available as free downloads that can be found on his website. 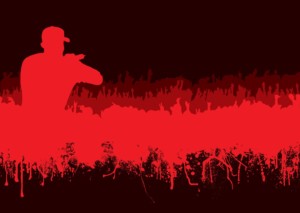 So there you have it. Eight incredibly talented and intelligent rappers with college degrees. Why would they choose to pursue careers as rap artists, then, instead of architects, journalists, or graphic designers? One word: Passion. They chose to follow what they are most passion about, to do what makes them happiest. Some chose to pursue college degrees relevant and applicable to the music industry, and most likely some of them chose to earn their degrees as backup plans. Life can be most rewarding when you choose to follow your dreams, making a living off of what you love; but it’s always good to have a backup plan.